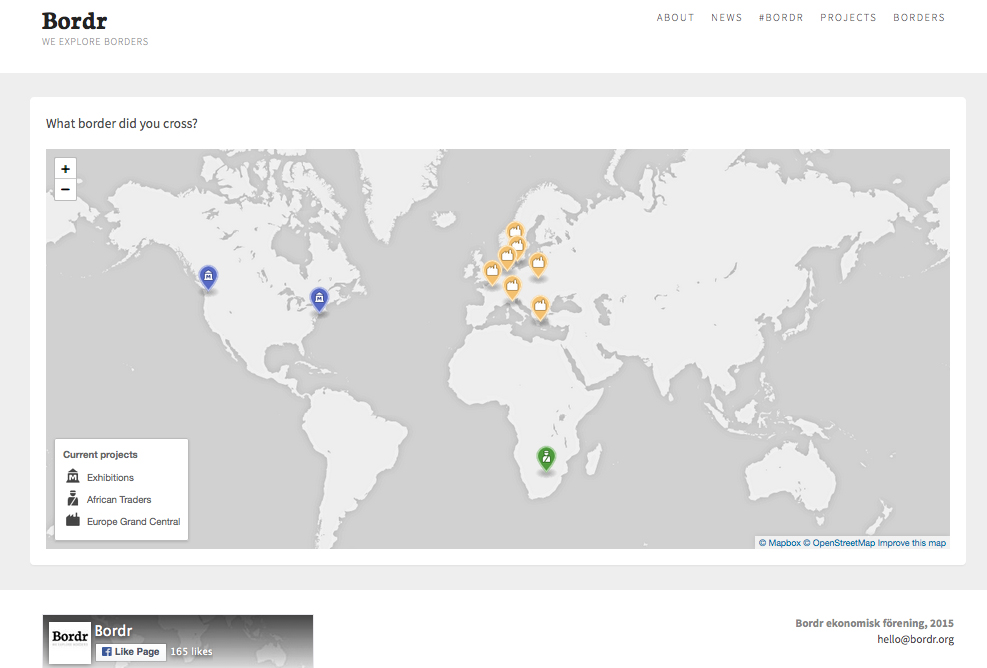 Short project description
Bordr.org is the sum of our divergent and multifaceted border exploration projects. We envision this site to be the border-hub, the IMDB of border stories, the Actipedia of border exploration, and the news and inspiration center for Bordr related affairs.

The site is a form of structured research in progress, trying to find best practices, worst practices (to avoid), and the most fruitful and meaningful ways of connection, engagement, inclusion, learning, and dissemination.

The site is built on lessons from all our projects, it is intended as the long term learning and dissemination hub for projects like Europe Grand Central, African Traders and our series of interactive exhibitions. But it is also an experiment in public engagement in itself.

This completely remade version of the site was launched in late September 2015, and we hope that our improvements of the site will never quite finish.

Purpose
To show the wider world what we are doing at Bordr – also, and not least, to understand it ourselves. We hope that others will become as passionate about border exploration as we are. Because we believe the world will be a better place if more people try to understand borders for the complex entities they are, and with curiosity.

– In our other projects we work with limited audiences and strict target groups. But here we want to surprise ourselves and find new connections, entries, and partners. Bordr.org is for anyone interested in borders.

Project Period
Start: Our original site appeared as www.projectborders.com in the fall of 2011. Several revisions followed. The current site is the first revision since the founding of the Bordr Economic Association in 2014.
End: Continuous

Locations
The site is hosted and developed in Seattle, USA

Project results
To be explored, researched, and disseminated

Inspired by
Particularly inspired by the Bordr iPhone app project, and the MicroAct project developed in Moscow by Christo de Klerk and Shriya Malhotra, Bordr, with Nitin Sawhney of The New School. Continued development will primarily be based on lessons from the Europe Grand Central project.

Credit
Site built by Christo de Klerk, Bordr, with heavy design input from Marcus Haraldsson, Bordr, and the rest of the Bordr board